It’s already a common thing that Pannonian moves the boundaries of extreme sport, and gives the audience many new tricks. Drivers’ originality, their courage and skills are what get them to the top. During the past 17 years we’ve witnessed a huge change of the standard tricks. Backflip used to be the best thing someone could see at a skate park, and now it’s only an opening trick.

INLINE
1. At inline we could see boys and girls on roller-blades doing a fishbrain, or a grind on a rail along one rollerblade, while they mostly hold their other leg in their hand.

2. A misty flip is also usual,, or a combination of a front backflip, and sometimes back, combined with a 540° turn. Misty flip can be seen mostly at jumps, and they’re done so quickly that we can’t even count the number of rotations.

3. Horizontal rotations are also very complicated, so a 900° turn (2 and a half turns) are very much appreciated. Rollers approach the jump at the front, and during the landing they jump backwards, which requires a lot of sense for balance. That trick is also called a niner.

4. Rollers sometimes surprised us with a 180° backflip ‘’liu kang grab’’. It’s a combination of a few tricks, backflip with a 180°turn, during which the roller extends one leg, while the other he draws to himself and grabs it with his hand.

5. One of more complex tricks is ‘’grind true spin savanah’’, which is a cross position of legs during landing on a rail or a wall to which is behind his back, and then grinding on it. 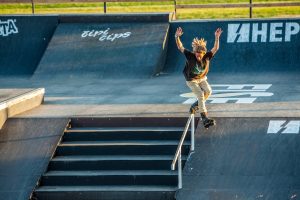 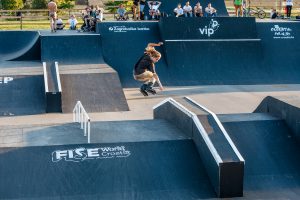 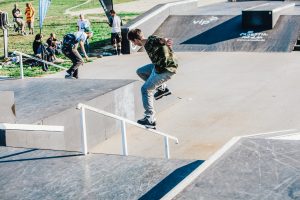 SKATE
1. Skaters never fail to take our breaths away. During the years they’ve amazed us with backside-lipslide, i.e. a trick in which they approach the bar with their backs, and then they jump over it with rear axle and glide with the middle of the skateboard.

2. And if that’s not enough, 2360 flip, one of the most common but most amazing tricks that are done on a skateboard. It’s a trick in which the board spins 360° left or right, and does another rotation around its axis.

3. A lot of skaters do melon grab because it’s visually appealing. One leg is bent, while the other is extended, so you get an impression lake the skater is laying in the air. They grab the center of the board, mostly between their legs so that the hand grabs the board from the back.

4. A lot of people know kickflip from video games. It’s one of the most basic tricks on a skateboard where the board is spinning around its axis, under the leg.

5. Manual or nosemanual is keeping balance on front or back wheels of the skateboard, where a sense of balance is evident. 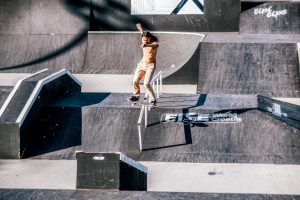 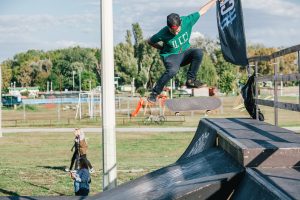 BMX
1. BMX part of Pannonian Challenge brings the best jumps, tricks, and greatest falls. A few years ago the first Cash Roll occurred at Pannonian. There was never a more discussed trick. How many flips in how many different levels does it include? In the middle of the trick the rider looks as if he suddenly switched the direction of the rotation. If you imagine a combination of 180°and flair, you won’t be wrong. During the ejection from the jump, the rider starts turning horizontally 180, and then leans back while pulling the BMX into a backflip. Since he has momentum from the first 180° spin, he ends it from the backflip so he could jump in the same position he jumped.

2. Backflip double tailwhip is a trick that amazed us a few years back. It’s a combination of backflip during which the rider rotates his BMX twice around his handlebar and then gets back on the pedals before he lands.

3. 900°barspin is also pretty obvious what it is. The driver spins with the BMX 2 and a half circles, during which he spins the handlebar around its axis. Of course, he lands backwards and slides the BMX and positions it front.

4. One of the more complex tricks that we’ve had a chance to see at Pannonian is Cork 720 double barspin. It’s a 720° rotation, but, just before dropping out of the jump, the rider leans back so that the BMX is positioned vertically, and then he rotates it around its vertical axis twice. At Pannonian we could’ve seen that trick combined with double barspin, or an additional double rotation of the handbar around its axis.

5. For years flair has been popular at Pannonian, but was brought to its maximum when it was combined with a tailwhip. It was a flair downside tailwhip, i.e. a combination of a backflip and a 180°rotation with a rotation of the BMX around its handlebar. 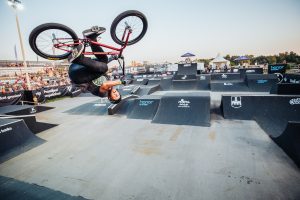 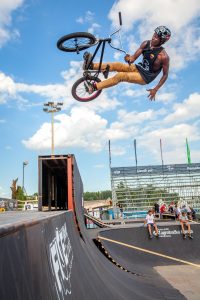 This year we don’t expect any less. We hope that we’ll continue moving the boundaries, and that the tricks will be even more amazing, and leave us even more surprised